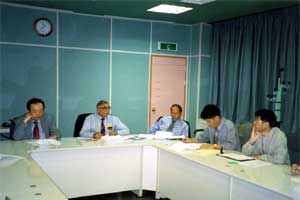 The RCA Regional Office (RCARO) recently completed draft of a Position Paper that reflects views of RCARO on RCA Management and also suggestions for the next cycle projects. The Paper was basically drafted by the Technical Advisory Committee (TAC) of the RCARO for each RCA Thematic Sector and later reviewed by distinguished international experts who have amplified experience and knowledge on RCA matters. The Paper will be reported at the 25th Meeting of National RCA Repesentatives in Colombo in the last week of May 2003 and is hoped to elevate at the RCA Lead Country Coordinators' meeting in Vienna in July 2003, tentatively. The mandate given to the RCARO since its inception in March 2002 is to increase RCA awareness to the RCA stakeholders including the public and to promote additional partnerships for RCA projects. Also, the RCARO was suggested to help in the management of RCA programme, mainly through participating in the upstream work for future RCA projects formulation. In this regard, the RCARO firmly believes that to express its views on the current RCA management and to participate in the upstream work for future RCA projects cycles will contribute greatly to the promotion of RCA.