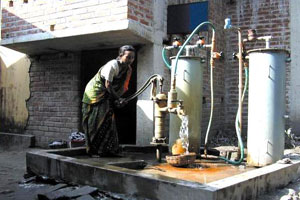 The United Nations (UN) General Assembly adopted a draft resolution at its 58th session proclaiming the period from 2005 to 2015 as the International Decade for Action, 'Water for Life', starting on World Water Day, 22 March 2005. The goal of the Decade is 'a greater focus on water-related issues to help achieving internationally agreed water-related goals, i.e.: to have by 2015 the proportion of people who are unable to reach or afford safe drinking water and who do not have access to basic sanitation.

Sound water management is one great topic that can be benefitted from nuclear science and technology. RCA has been carrying out an important coordinated regional project on isotope techniques for groundwater contamination studies in the urbanized and industrial areas under the topic of 'Clean Drinking Water' in 2003-04 cycle. RCA has many successful stories using nuclear techniques to identify contaminated groundwater and to save clean drinking water. Meanwhile, it is noted that more than 20 years ago, the UN declared 1981-1990 as the International Drinking Water Supply and Sanitation Decade. The aim then was to provide safe drinking water and adequate sanitation systems for all people by 1991. Now, it was largely welcomed by the world that UN declares again International Water Decade for the sake of world population. Coordination of activities for the Decade will be in the hands of the UN Under-Secretary-General for Economic and Social Affairs.

For more information: www.un.org/ga/58/ ; Water resources in the United Nations system or UN Department of Economic and Social Affairs" esa@un.org