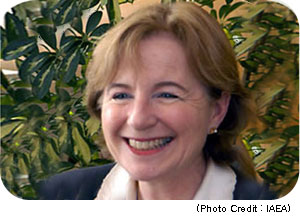 Ms Ana Maria Cetto, IAEA Deputy Director General, has been named one of Mexico's Woman of the Year. With a shared Nobel Peace Prize already to her credit, Dr Cetto's December 2003 award places her in rare and distinguished company. Dr Cetto, a renowned physicist and also a respected humanitarian, received the honor in Mexico City on 10 December 2003, along with two other women scientists.

The honor reflects her intense commitment to science over the past 35 years and the breakthroughs she made to our understanding of how light and matter interact in the quantum world. Dr Cetto has co-authored some 70 research articles, and the book 'The Quantum Dice, An Introduction to Stochastic Electrodynamics'. But her work is not just about discovery and microscopes. It is the ethics behind the science that has driven her decades of involvement in the fight to eliminate nuclear weapons. Dr Cetto was a member of the Pugwash Council (a movement of scientists committed to banning weapons of mass destruction) when it was awarded the 1995 Nobel Peace Prize for its 40-year efforts.
For this Mexican Woman of the Year, it sounds as if the best work is still to come. It may not be the last of Dr Cetto's honors.