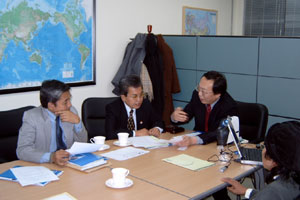 Prof. Djaloeis has been long associated with RCA matters representing Indonesia. He was the National RCA Representative of Indonesia during the past several years. His affection for RCA has been well exhibited in his recent report 'RCA in the 21st Century' prepared by the request of the IAEA. In the report, he strongly recommended that RCA should develop additional programme partners based on enterprise spirit. Together with the Chairman, Mr Suhartono Zahir, Deputy Chairman for Licensing and Inspection who also had long association with RCA matters during his mission in Vienna as scientific attaché of Indonesian Embassy, and Mr A S Natio Lasman, Deputy Chairman for Nuclear Safety Assessment of BAPETEN joined in the visit.